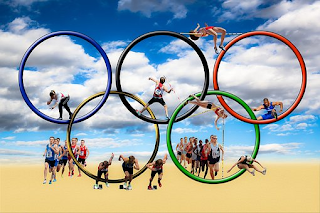 As I begin to write this commentary, the 2010 Winter Olympics in Vancouver are coming to a close. It is the conclusion of a very long involvement for most of the athletes who have been competing. For them, the process actually began long before the games started.

It goes something like this. The initial invitation to "try out" for the Olympic Games is extended to all athletes who are interested. The Olympic opportunity is open to anyone; but the invitation comes with no guarantees; and the athletes know this, going in.

They clearly understand that the final selection of athletes to actually attend the games will be based only on performance. If they want to go, they gotta' be good. And so, they seek to excel. And if they do, they get an all expense paid trip to "The Big Game."

Typically, we understand the necessity and appropriateness of this selective process regarding Olympic athletes. For them, it all makes perfect sense. But what sometimes escapes us is that, in the most significant ways, redemption is a like process.

If we look at redemption through the "lens" of the Olympics, we get a very accurate picture of how salvation really works. In fact, it is a much more accurate view than the "whoo doo" (OK - I made that word up), pick-and-choose mess that "pop preaching" and "pop preachers" have left us with, over the last century. Their "pop gospel" is really no more than a shallow "cliché " that dangerously over simplifies the real redemptive requirement.

So, let's just walk through the process and notice the similarities of the Olympic and Divine operations. First, the idea of "going out" for the team. Anybody can do it regarding the Olympics. And anybody can do it regarding Heaven. We are all afforded the opportunity to try for the prize. Thus, 2nd Peter 3:9, "The Lord is not slack concerning His promise, as some count slackness, but is long-suffering toward us, not willing that any should perish but that all should come to repentance."

In the authentic redemptive process, the "try out" for Heaven is the opportunity that Christ affords us through His Cross. And, contrary to the pop preacher, that opportunity comes with no guarantees, exactly as in the Olympics. We must merit divine selection by successfully answering the divine performance requirements. Just like the athletes, if we want to go to the "big game," we gotta' measure up.

After the pop-preacher finishes his gasp, let's look at Matthew 3:1 as good confirmation of this reality. Matthew writes, "In those days John the Baptist came preaching in the wilderness of Judea, and saying, 'Repent, for the kingdom of heaven is at hand!'... (v.5) Then Jerusalem, all Judea, and all the region around the Jordan went out to him and were baptized by him in the Jordan, confessing their sins.

"But when he saw many of the Pharisees and Sadducees coming to his baptism, he said to them, 'Brood of vipers! Who has warned you to flee from the wrath to come? Therefore bear fruits worthy of repentance, and do not think to say to yourselves, 'We have Abraham as our father.' For I say to you that God is able to raise up children to Abraham from these stones. And even now the ax is laid to the root of the trees. Therefore every tree which does not bear good fruit is cut down and thrown into the fire.'"

So, no guarantees, no free passes - even in Christ. Ultimately, the deal is - you gotta' qualify to go. And according to John, that qualification involves being personally fruitful.

Jesus, Himself, confirms this in John, 15:1 and following. There He says, "I am the true vine, and My Father is the vine dresser. Every branch in Me that does not bear fruit He takes away; and every branch that bears fruit He prunes, that it may bear more fruit."

So, the plain truth - the pop preachers got it wrong. In their overly simplified gospel, to go out for the team is the same as making the team. It is just kind of an automatic deal with them.

But, in fact, embracing Christ affords us the opportunity to succeed in the redemptive process. It does not provide us an automatic success. The truth is, we are absolutely on the hook to bear fruit - or be "cut."

What kind of fruit? Well, it's what the Apostle Paul calls "The Fruit of the Spirit." It is, in plain terms, a "character fruit," which is produced as a result of our personal Spiritual merger with the living Spirit Christ.

Paul gives us a very clear reference to this character fruit in Galatians 5:22 where he says, "But the fruit of the Spirit is love, joy, peace, long-suffering, kindness, goodness, faithfulness, gentleness, self-control."

I know. The pop preacher didn't mention this. To tell you the truth, I'm not sure he even knows about this. He tends to stick with just the Cross, forgiveness, and the Dying Christ - that is, after all,  the simple part - and the popular part.

So Christ, by His Cross, affords all of us the opportunity to pursue salvation. But, as with the Olympians, it is a serious pursuit involving a serious, no-nonsense selection process.  But if we choose to pursue the prize of God's Heaven and eternal life, we then enter a phase of redemption where the choices no longer lie with us, but with Christ.

In this phase, as in the Olympics, all that matters is the performance requirement. And Christ will make his choice as to who will "go" and who will "stay home" based only in that real requirement.

This is why He would say on one occasion, (John 15:16), "You have not chosen me, but I have chosen you, and ordained [fixed or established] you, that you should go and bring forth fruit, and that your fruit should remain..." [Definition bracket added]

So, it's up to us to make the first choice, to go out for the team or not.  But, Christ makes the final choice, the selection choice, based entirely on His performance requirements.

So, let's update. Once Christ affords us the opportunity of salvation by His Cross, He goes even further. As a direct benefit of His Resurrection, the Living Christ is then able to empower us to meet the performance requirement - fruit bearing - through a personal merger with the believer, what the Church calls "the Spiritual Baptism."

This stand alone event is literally our integration into His divine nature; the energies of which, then enable the believer to produce this godly character fruit. Peter puts it this way (2 Peter 1:3) "...by which, have been given to us exceedingly great and precious promises, that through these you may be partakers of the divine nature..."

And then finally, after enabling us to meet the divine performance requirement through this Spiritual integration with Him, Christ then ultimately chooses us for Heaven.   And that choice is entirely based in the real character fruit that we have born in His divine energies.

Sweet success! And it's all Christ!

I know - all of this is a little more complicated than the pop preacher may have lead you to believe. But that is because his overriding desire is to keep it simple and stay, well, popular.

However, if you listen to Jesus, He makes it very clear that we are involved in a serious and stringent selection process. And not unlike the Olympics, it is absolutely based in a very real performance criteria. In Matthew 20:16 Jesus says, "So the last will be first, and the first last. For many are called, but few chosen."

So, here is the reality that scares the pop preacher half to death. At the end, God will only find those qualified for His Heaven who have experienced the Spiritual merger with the Living Christ. The reason? Because it is only they who have tapped into His divine faith and energy to effect a profound transformation of the heart, yielding the true character fruit of the Christ essence within.

Not as simplistic as the pop preacher said? Maybe not. But you might want to consider the source.

Here is the bottom line: It is imperative that we get beyond the simplistic ideas of pop preaching and seek the baptism of the Spirit. To do so is to seriously and passionately pursue a personal integration with the risen and Living Christ.

And, to seriously seek a personal merger with the Living Christ is to stop presuming that this Spiritual integration is an automatic to conversion.  This Spiritual merger is not merely an innate and a mostly imperceptible part of the "redemptive package."

Indeed, this mysterious New Testament appointment is a dramatic, stand alone event, just as it was in the beginning (Luke, chapter 2), that awaits every believer. It is to be sought after and experienced, as a unique and indispensable necessity to our ultimate spiritual success (Romans 8:7-9).

So, the idea is to pursue, find, and embrace this divine empowerment with the passion of a "Spiritual Olympian." Why? Because a life literally lived in the vitality of the resurrected Christ is ultimately our only real ticket to The Big Game.

*****
Oh, and don't worry. I'm sending out a memo to the pop preachers. It reads, "Yes guys, there is a personal performance requirement for salvation. But don't panic. Jesus has it covered. I'll meet you at the empty tomb, and we'll go over the details."
Posted by Larry Burnett at 9:12 AM