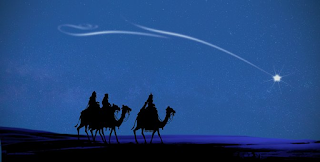 On that first "Silent Night" so long ago, two worlds gently touched. The unseen Spiritual world of our Creator, bumped ever so tenderly against the one in which we live.  And, God reached out and laid a gift at our feet.

The gift was a harmless Child. And that Child had great purpose attached to His life. And He fulfilled that purpose with perfect devotion.

But, to truly grasp the depth of the Christ Child's devotion,  we must understand the true length of His journey.  This baby came to our world from the place of His own unlimited joy and power.

In that former place, time could impose no limit on him. A thousand years were as one day,  and a day,  as a thousand years. There, tomorrow was as yesterday - and both were always but the present to Him.

Nor could any space impose its dimension on Him.  Before he came here as a baby,  He was everywhere in the universe,  while, at the same time,  completely encompassing it,  as its Creator.

Before this Baby arrived in our world, He knew no restraints to even His slightest whim. Whatever He determined, He could effortlessly do.

But, on that first Christmas night,  as God presented this innocent gift to our fallen race,  all of that changed for Him.  He became like us in every way, save one.  And, it was all to deliver God's message of love, forgiveness, and the opportunity for a true newness of life.

But, the toll of His faithfulness, both to God and to man, was hard-paid in long suffering.   As, He joined our race, this Child began to experience the pain of all things human.

How unfamiliar and difficult that first breath of air must have been for one who, only a moment before,  had no need to breathe at all.  But now,  He must not only breathe,  but also, feel the strange throes of hunger and thirst, and the deep depletion of exhaustion.

This one who had so effortlessly governed creation merely by His graceful thought, must now become entirely surrounded by the bitterness of disappointment, frustration, and failure.

He who had, only yesterday, instantly spanned the universe without effort, must now spend years,  merely to cover the infinitely small regions of the Promise Land.

He who created our sun,  and numberless others like it,  and who flung them all into the Heavens with but a word - must now bear up under that sun’s disabling heat - and know the sweat born from laboring beneath it.

And every day, He had to endure the ingrained pain of humanity's physical frailty.   And, He was forced to do so in the knowledge that,  this was pain which was never meant to be.  In the world He designed and created,  it was never to be known.

And, though He had lovingly given life to a perfect race in Adam,  He must presently endure the wounds which this now depraved race would inflict upon Him.  And, how horrible it must have been for the very essence of all life to lie down in the dark void of death - for our sake.  But - He did it.

Thus, in His long suffering, the baby Jesus faithfully and courageously traversed two worlds to bring a message of everlasting hope. And now, each Christmas, the Christ freshly calls to us again. In the soft and lovely undertones of divine love, He whispers: "Be reconciled to Me. Take my hand, and walk with Me; and, I will make you new."

And, why would we not give ourselves to this One,  who has so completely given Himself to us?  How can we possibly resist such gentle love, so gently delivered?