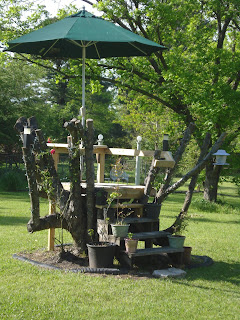 Then the voice said something completely unexpected.  It said, “Your seven grandsons, dummy.”

So, I immediately set to work.  And now, I spend my days watching the driveway, waiting, and anticipating the coming good times of summer.

I know The Happy Stump is kind of ugly.  But, it’s “elevated.”  And, it has steps.  And boys are not really into “pretty” anyway, when it comes to such things.  They’re much more about climbing, and jumping off, and new and exciting perspectives on the world, and “how can I make it even better.”

The voice is right.  If I know my guys, and I do, they're coming.  And I’m certain – it won’t be ugly to them. It will be a hoot! – well, for the first fifteen minutes.

The Happy Stump actually started life as The Happy Shrub.  More than 40 years ago, it was just an innocent little Red Top Photinia.  But, over the years, it grew, and grew, and grew.  In the process it survived a lightning strike and a chronic susceptibility to a kind of Black Spot Mold which can never really be cured, only treated - if you are inclined to chronically do so. 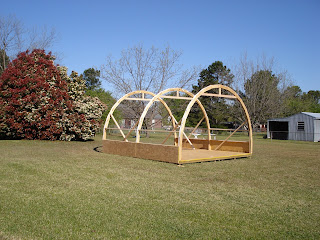 That's where I entered the picture.  I encountered that vastly overgrown shrub (left side of the picture) about 12 years ago.  It was shedding leaves like crazy due to the mold.  So, I decided to help what was now a 40+ year old tree, I think out of a simple respect for its sheer tenacity and durability.  You hate to give up on something (or someone) who hasn’t given up on themselves.

So, I began to gradually and slightly trim the tree to a more manageable size so I could more adequately treat its chronic mold problem.  Over time, the trimming started to change the look (and feel) of the tree.  It became a truly pleasurable thing to look at.  Its large circumference canopy and the several skinny trunks beneath, which supported that canopy, caused it to roughly take on the look of a big mushroom sporting a flat-top haircut.

It was at this point, maybe three years after we met, that this unique “tree” started to became “The Happy Tree.”  Every hot Summer in South Arkansas it provided our family with a huge circle of welcome shade.  In that summer shade, we laughed together, and ate hamburgers and homemade ice cream.  We drank cold Cokes, and told tall tales.

We hung a rope swing from its limbs where my now older grandson’s learned to soar.  We decorated it for Christmas and July 4th.  And, it shaded the blow-up swimming pools on many hot days.  In short that tree wormed its way into our family’s heart – well, at least, into mine.

And, in all which it did for us, it did under the burden of its chronic illness.  Every Spring and Fall the Happy Tree and I would quietly doctor its ailment.  But, I could tell that with each season things were getting worse.  Limbs began to break and fall off for no visible reason.  And so, its appearance began to change again.  And this time, not for the better.

This all eventually became like a long, slow and sad goodbye to a friend.  It seemed to enter its final stage a couple of years ago.  Until now, the tree has become what you see it in the pictures.  Not a single new leaf appeared this year.  Obviously, my old friend had finally succumbed.

So, my initial thought was to take it all the way down to the ground.  I planted a young Mimosa Tree to replace its needed shade – though never its revered sentimental contributions.

But, on the day I went out to begin the work of taking down the rest of the tree, out of the blue, it occurred to me that maybe The Happy Tree was not done yet.  Maybe, at least for a few more years, it could become its own memorial.  And, maybe the old tree and my newer grandsons could make a few joyous memories of their own.

So, I used what I already had on hand, lumber left over from previous jobs, an old pallet for the floor, some screws and nails, and a slightly tattered umbrella – and “The Happy Stump” was born.

I know the Happy Stump won’t last long.  But, while it does, it will carry on the proud traditions of the tree it once was – a tradition of laughter and good times in the hearts of children and adults alike.

I’m no tree.  I am a man, made extremely valuable by the love of God which is set upon me.  And though, like the tree, I, too, am in a long, slow, and chronic decline.  Yet ultimately, I will rise again and be forever alive and happier than ever in Jesus Christ.   Words entirely fail my emotions when I think of it!
Posted by Larry Burnett at 7:28 PM