For All The Marbles 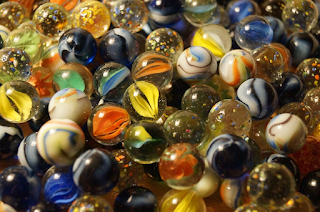 Here is a question for ministers.  What would you sacrifice to remain relevant in your role as a minister?  To say it another way, what would you give up to retain a credible voice in the cultural discussion?  What would you be willing to sacrifice of your consummate self in Christ in order to continue to be taken seriously in the mainstream conversation?

Add to that, this query.  What would you be willing to sacrifice from the nature and role of the Church to maintain its relevance on the world stage?  How far would you go to accommodate the demands of the secular society in order to secure their continued attention and general respect?  This is the strategic crux of a game which is played out in our world every day.

So, here is how the Devil’s deadly game of Risk And Relevance is played.  There are only two players at the table:  the Devil, or one of his minions, on one side; and some Representative of the Church on the other side.  The rest of humanity, as individual souls, are on-lookers.  And, they are the cherished prize to be won or lost by one opponent or the other.

The ultimate goal for each player in the game is to maximize their own influence over humanity and while attempting to neutralize the influence of their opponent.  The play involves only one of two strategic decisions:  “Risk or Don’t Risk.”

To affect their opponent’s play, the players are allowed to employ Intimidation Tactics to manipulate their opponent to a losing position.  So, here are some typical gambits from the annals of this deadly game…

A Minister: (His opening play)    I will Risk myself to the service of Christ in order to reach humanity and save souls through the ministry of God’s Word.

The Devil:  That’s fine, because I suspect you will only be an obscure minister of little import or impact.  So, I’ll Risk it.

The Minister:  I will not be small and unimportant.  I intend to be very successful and influential in my ministry.  So, I will Risk my money, my time, and my energy.  I will invest them in education and training.

The Devil:  That’s fine, but I know the complexity of the religious politics which will be involved in your attempt to rise to a position of prominence and influence in the Church. And, I don’t think you have the political skills or the good sense to simply “play ball” with the powers that be.  So, make your investments if you will.  I’m happy to Risk it.

And so the daily game goes on until the minister eventually finds himself, after his educational years, in a five year old ministry in a smaller local church that has entirely plateaued numerically.  And the game continues…

The Devil:  Well, it seems I was right in the beginning.  Here you are, stalemated by your own stubborn adherence to your antiquated values and ideas which are becoming increasingly counter-cultural. And now, your reputation and personal standing are at risk.  Your superiors are watching and beginning to have serious doubts about your abilities.
And, the gap is becoming very visible between your value system and that of the laymen in your congregation.  They are obviously pulling back from you.  Is this what you understand to be success?  If it is, I’m happy to Risk your continued impact on humanity.

Beads of telling sweat begin to pop out on the young minister’s forehead.  He begins to feel the great weight of his personal exposure.  He looks away and down to ponder his next play. And then, he makes a critical decision.  As he lifts his head, there is obvious relief on his face.

The Minister:  No, no, in fact, I will Not Risk my personal aspirations, my reputation, and my influence.  That does not serve my purpose.  So, I do not think that it is the strategically correct thing to do.
I think this would be my better play.  I will exchange my present perspectives for new, more culturally accommodating views.  This will bolster my credibility with the secular culture and bring back the confidence and appreciation of the more shallow but influential members of my congregation. And so my own influence will be enlarged.  And through that increased influence, I will become more effective.

At this point in the game, the Referee pronounced the young Minister “Neutralized.” To his complete surprise, the young man was then instructed to leave the table to make way for the next player.  He was directed to stand on the Devil’s side of the table as one of his captured souls.

The Devil leaned back in his chair and lowered his head to smile a gloating smile as the young minister made his way around to his side of the table.  “How easy these guys are,” he thought to himself. "I had him from his second play."

As the defeated minister vacated his chair, a layman, representing a local church body sat down to take on the Devil.  He was a devout man of no small experience in these games.  The Devil had met this warrior before; and he was taking nothing for granted.  So, he opened with one of his best psychological plays.

The Devil:  Sir, I know of your local church.  I know that your numbers are dwindling.  Does that not tell you that you are out of step with your community?  I challenge you to Risk some small adjustment to the values and teachings of your church so that not so much is required of people by them, thereby making your church more attractive to the larger community.

The Layman:  No, I don’t think so.  We have every confidence in the power of the God’s Truth to draw men’s hearts to Him.  We’ll just Risk ourselves to the power of His truth.

The Devil:  You will risk it?!  You will risk it?!  Sir, do you not realize that you are risking the souls of men. Not that I mind, but don’t you know that God will hold you accountable for the loss of those souls.  However, if that’s your play, I am happy to Risk it with you.
But, I just have to say, it seems to me that if you want to continue to keep your doors open, and pay your bills, and get your numbers up, the smarter play would be to “slightly reinterpret” the divine requirements in your Gospel, so they are more comfortable for people.
But, hey, I’m certainly not going to complain.  I sat down here to win.  So, I’m happy to take those souls who are retreating in droves from your challenging Truth.

The Layman:  Sir, there are some things that you need to understand.  First, I don’t keep the doors of my church open, God does.  I don’t pay the bills, God does.  And I am not responsible for the number of people who may or may not embrace His Truth.  I am only responsible to the Truth, itself.
And should I fail that single task for which I am, indeed, very responsible, what real difference would it make if the whole world attended my church?  They would still end up on your side of the table at the end, anyway.
So, speaking for myself and my church, we will Risk it when it comes to faithfulness.  We will Risk the ridicule.  We will Risk the rejection by a wayward culture.  And, we will Risk our own accountability before God.
But what you need to know, too, is that these are all calculated risks.  For, in facing up to these possibilities, we have also factored in some unchanging realities: the power of Almighty God and the timeless attraction of His Truth to a desperate human heart, to name a couple.   We are also counting on the effectiveness of our our personal and intimate friendship with God, Himself.
And besides all of that, you and I both know that this game is rigged.  In the end - the faithful win, and you lose.  So, you need to understand - in these ears, your intimidation's have the ring of, "laughable."
So, our local church has zero intention of "accommodating"  the culture.  Rather, our intention is to challenge the culture to accommodate God's truth and embrace the Lordship Jesus Christ.
And, just to be clear – the unchanging approach of our church will always be a simple one.  It is for our membership to walk closely with God and to Risk everything on His love, His truth, and His help.

One thing the Devil had learned from centuries of playing this deadly game was that there really is no counter-play for real faith.  So, with a frustrated sigh, he simply rose and walked away from the table, even before the Referee could declare his decisive loss to this opponent.

But, even as he did so, he was contemplating tomorrow.  “There is always tomorrow,” he thought.  “And these days, especially these days, I like my chances of finding a much less determined opponent in the next round...”

Such is the deadly game that the Church plays every day. Always the projected illusion is the same.  It is that, somehow, our relevance is put at risk by our faithful adherence to God’s Truth. And always, in the face of this insinuation, we are left to choose between one of two plays - faithful service to divine truth or fearful and cowardly compromise.

"Nevertheless, when the Son of Man comes, will He really find faith on the earth?" - Jesus

Posted by Larry Burnett at 3:35 PM